On Thursday, Norway’s sovereign wealth fund announced it is “excluding” four bitumen producers from future investment considerations. Alex Pourbaix, CEO of Cenovus, fired back with a public letter dripping with hostility. The dust-up is a peek behind the curtains at an industry being squeezed by increasingly stringent climate goals.

The Norges Bank’s decision to prohibit investment in the Canadian companies came after a recommendation from its Council on Ethics that producers be excluded for “acts or omissions that on an aggregate company level lead to unacceptable greenhouse gas emissions.” In addition to Cenovus, the other producers are Canadian Natural Resources Limited, Suncor Energy Inc, and Imperial Oil Limited.

Historical context is everything

Six years ago, these companies sat around a table with five non-governmental environmental organizations (ENGOs) to thrash out a deal: climate policies and lower emissions in exchange for no cap on bitumen production.

Then Pembina Institute executive director Ed Whittingham, a key player in the talks, told Energi Media that both sides agreed that falling emissions-intensity wasn’t enough: in the near future, absolute emissions must decline as well. The ENGOs then put a 100 megatonne (Mt) per year emissions cap on the table. Suncor VP Arlene Strom said the proposal was difficult for the companies to accept, but in the end they realized that a bold move was required to make the deal work.

A few months later, the handshake agreement was enshrined in the NDP government’s Climate Leadership Plan.

The CEOs took a calculated risk that innovation would lower absolute emissions fast enough to stay under the 100 Mt cap, but they got what they wanted.

Then, Pourbaix and a new crop of executives took over the C-suites, the Alberta government changed, and the companies welshed on the deal. Over the past year or two, the once visionary oil sands producers have done their best to undermine provincial and national climate policy.

For example, the Canadian Association of Petroleum Producers’ 2018 climate policy report, which laid the groundwork for its recent COVID-19 financial support submission to Ottawa, 13-pages of climate and environmental regulations the industry wanted to eliminate, relax, or delay. Pourbaix helped lead the charge while sitting on the CAPP board of governors, which he now chairs.

The most important promise they broke is the one to lower absolute emissions. Instead, they are trying to convince Canadians that lowering emissions-intensity is enough. This should be seen for what it is, a flimsy attempt to greenwash the fact that industry has no interest in lowering emissions, at least in the short to medium-term.

Pourbaix accuses Norges of using “outdated and incorrect” data, but the truth is that the fund simply didn’t buy Cenovus’ argument.

“Cenovus has reduced the emissions intensity of our oil sands operations by approximately 30 percent over the past 15 years,” Pourbaix wrote in his letter. “We’ve set ambitious targets to reduce our per-barrel emissions by another 30 percent across our operations by 2030 and hold absolute emissions flat during that time.”

For Norges, another 30 per cent isn’t enough. “Oil production of this kind results in far higher greenhouse gas emissions than the global average, and the company has no specific plans that would reduce its emissions to this level within a reasonable period of time,” the Ethics Council wrote in the May 12 assessment posted on its website.

Even if Cenovus was on the lower end of the IHS range and met its 30 per cent target, that would still leave it far above the global average. 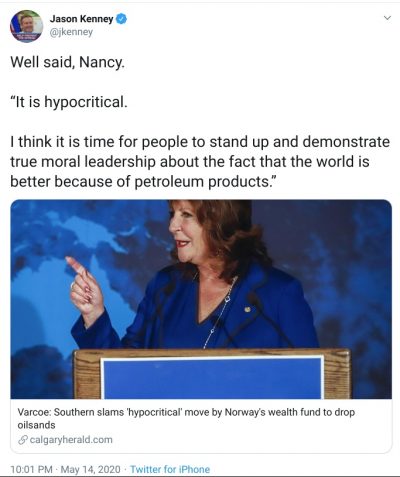 A reasonable argument can be made that the more accurate comparison should be to other heavy crude oils from Mexico or Venezuela, Canadian competitors. Instead, Pourbaix accused Norges of “hypocrisy” because Norway says it plans to produce oil as long as there is demand. Alberta business legend Nancy Southern was even recruited to amplify the message: “What more can you ask of them? What more do they have to do?” she asked in a Calgary Herald interview. “It is hypocritical.”

This is a silly position. Johan Sverdrup emissions are the lowest of any crude oil in the world, while those of the Alberta oil sands crude are close to the highest. If climate change and emissions are the measuring stick, Norway wins and Canada loses.

Cenovus’s only response is not a strong one: “We are also focused on innovation that will help us achieve our aspiration [emphasis added] of net zero emissions by 2050,” Pourbaix wrote.

Aspiration is not a target. Furthermore, the aspiration “will require ongoing focus on technology solutions beyond those that are commercial and economic today,” the company said in a January 9 press release. Cenovus has an admirable innovation record and if it had confidence in its abilities it would make the aspiration a target.

Also, “flat emissions” are not falling emissions, which is the Council for Ethics’ standard.

Another metric the Council used to measure the oil sands companies’ performance is policy: “The company’s greenhouse gas emissions are not subject to a regulatory regime that is as stringent as the EU ETS [European Trading System], and have a government-imposed cost that is considerably lower than corresponding emissions in the EU.”

Again, Pourbaix had a reasonable response at this fingertips. The ETS carbon price in February, before the COVID-19 pandemic drove it down, was 25 euros or about $38 Canadian per tonne. As part of an equivalency agreement with Ottawa, the Kenney government agreed to a $30 per tonne rate for its TIER large emitter regime.

So, lower than the ETS but not “considerably lower.”

But TIER is a poor defence for Cenovus because economist Andrew Leach has estimated that the UCP program is about one-third less effective at lowering oil sands emissions than Notley’s Carbon Competitiveness Incentive Regulation it replaced.

Plans to boost production over 100,000 barrels per day by 2025 – according to the company’s 2019 investor presentation – under a tepid regulatory regime is probably not a narrative that Pourbaix wants to push in public.

Norges isn’t the first European financial institution to take aim at the oil sands’ high GHG emissions. In 2018, it was the UK bank HSBC and last year it was the Zurich Group, the world’s largest re-insurance firm. Premier Jason Kenney publicly ranted and infamously threatened that the Alberta government would boycott HSBC, all to no avail.

Also, the Europeans are miles ahead of Alberta when it comes to acknowledging and adapting to the energy transition, whereas it was big news a few months ago when Kenney actually uttered the words.

On Tuesday, Energi Media interviewed Valentina Kretzschmar, VP of corporate research for Wood Mackenzie, about how the European oil and gas majors are pivoting to the low-carbon future far quicker than their North American counterparts. The Paris Agreement at the end of 2015 was a turning point.

“Over the last few years, these companies have really started to invest in a number of different clean technologies [like windfarms]. At the same time, they started to make carbon commitments which were modest to begin with,” she said. “But these commitments have grown year on year…[during the pandemic crisis they reconfirmed] that path towards a net-zero strategy to 2050.”

Not aspirations, but commitments.

Former environment deputy minister Eric Denhoff described in an Energi Media op-ed how leading Wall St. investment banks grilled Alberta government representatives about climate policy during a 2018 trade visit, especially one meeting with a VP of sustainability: “We discovered that his investment house was being swamped – more than 10,000 emails, letters, and phone calls – with demands from its own shareholders that the company stop investing in the Alberta oil sands. For his company to continue investing he needed answers. His questions were tough, detailed and demanding. This is Alberta’s new reality.”

Unfortunately for Alberta, this issue is about more than bungled corporate communications: the Canadian oil patch is starving for capital and has been for a few years.

According to a December review from the Alberta Securities Commission, oil and gas reporting issuer companies raised almost zero dollars through public offerings in 2018 and only a billion in 2019. Compare that with $16 billion in 2016, the depth of the mid-decade oil crash.

Disruptions to any part of the plan and companies like Cenovus could find capital more expensive and more difficult to come by. Pourbaix’s response to the Norges announcement is clearly designed to reassure jittery investors.

“Hostility is really not a very good political strategy,” Calgary communications advisor Doug Lacombe is fond of saying. Someone needs to ensure that Pourbaix and his fellow oil sands CEOs get THAT memo.