In a previous column, I argued that the 2020s would be the “disruptive decade” (when the new technology becomes competitive) for electric vehicle adoption, just as the 1920s were for tractors. In this column, I want to discuss another similarity between EVs and power-farming, as it was often called: the complexity of buying the new technologies. Fortunately for modern consumers, they have a big leg up on their great-grandparents thanks to social media. 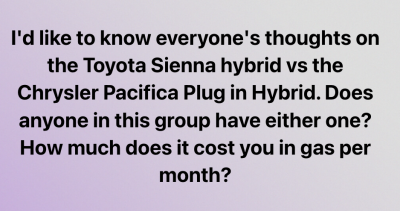 My social media feeds are full of consumers debating the relative merits of electric vs. internal combustion. Capital costs (purchase price), operating costs, public charging, range anxiety, service, and many more factors come into play. And the experience of Canadians in BC and Quebec, the only provinces with ZEV mandates and therefore an adequate supply of EVs to buy, is different than it is for others.

This reminds me of early attempts to speed up the adoption of tractors in Saskatchewan and hybrid corn in Iowa.

The University of Saskatchewan conducted “tractor schools” during the Twenties. Farmers would gather at a local farm and agriculture instructors like Prof. E.A. Hardy would provide hands-on instruction, including discussions of the economics of horses and power-farming. These schools were very popular because farmers could quiz the experts and discuss among themselves.

Similarly, during the late 1930s, the University of Iowa picked an influential farmer, someone trusted by his neighbours, to host a hybrid corn “school.” The host farmer’s status would encourage less innovative farmers to overcome their reluctance to try the new corn that produced higher yields, but did not reproduce, so was more expensive up-front.

The modern equivalent of these schools is Facebook, Twitter, and LinkedIn, where EV owners and enthusiasts share information with prospective buyers. Debating charging at home and in public is popular. How EVs and their batteries handle cold was a hot topic (pun intended) this winter. Not all EVs perform well and some dealerships are poorly equipped to provide service and warranty work. And so on.

The point here is that buying the new tech is no less complex for modern consumers than it was for farmers a century ago. Buyers are not only hungry for information, but experience with their particular circumstances is especially valuable. The purchase calculations of a lower mainland BC buyer may be very different than those of a small town Alberta consumer.

For example, one often hears that EVs cost too much. According to a 2019 Canadian Energy Regulator study, electric cars have been cheaper per kilometre of driving since 2018. (an interesting 2022 US study) And while many consumers buy based on the sticker price, the average new car costs $45,000 in Canada, which is very close to the purchase price of many EVs, especially when federal and provincial subsidies are considered. 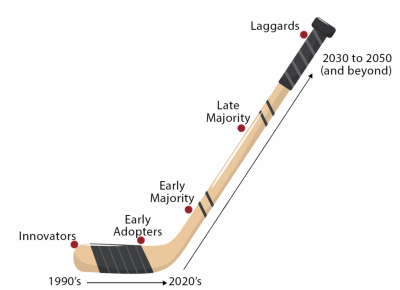 My rule of thumb is that Innovators are willing to pay the highest cost and accept the most risk of under-performance or failure by a new technology. As adoption moves rightward from the toe of the hockey stick blade, adopters are less and less willing to pay a price premium or accept risk.

When adoption reaches the inflection or tipping point on the adoption curve, the heel of the stick, then cost, value, and risk are judged to be the same as the old technology, internal combustion cars in this case. Then the stage is set for exponential growth, represented by the shaft of the hockey stick.

And that’s where we currently sit in 2022. EV sales forecasts are bending sharply upward as automakers finally bring a full slate of models to market, prices continue to fall, and supply is set to expand.

Now, when someone says that EVs are too expensive or they’re not ready for primetime, what they really mean is that their personal calculation doesn’t yet favour electric transportation.

The triumph of electric over internal combustion is now inevitable and social media will play a big role in making it happen.