Understanding modern energy politics is like trying to get a handle on Middle East politics – definitely not for the faint of heart.  But energy – and it’s policy twin, climate change – is at the heart of our most contentious public debates. Here, then, is a simple model for sorting the dog’s breakfast that is American and Canadian energy politics. 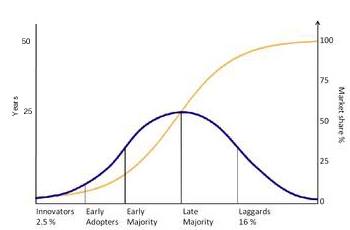 Let’s start with the assumption that the global economy is five to 10 years into a 100-year transition from fossil fuels to clean energy technologies. Where do those numbers come from? They aren’t exact. Some experts I’ve interviewed think the transition began several decades ago. More conservative analysts are skeptical one has started at all arguing that clean tech like wind and solar power is only used at all because of subsidies put in place by left-wing governments.

On balance, however, the economists, engineering professors, utility executives, energy executives, and so on, that I have interviewed over the past few years agree that an energy transition has recently begun and it will be many decades before it ends.

If we place clean energy tech on the graph at right, all the technologies (wind and solar power generation, electric vehicles, battery storage, etc.) would be at the very bottom of the S-curve, and clustered at the left of the bell curve (the province of Innovators, tech lovers willing to pay a very high premium for new gadgets).

The idea that we have begun an energy transition is important because it has been adopted by both the national governments of Canada and the United States, and many state (e.g. California) and provincial (Alberta, Ontario, British Columbia) governments as the fundamental worldview upon which their energy and climate policies are based.

Here is another important idea that governments have accepted: compressing the 100-year timeline of the energy transition increases cost and risk. The faster you goose the process, the more likely you are to break something.

You only have to look at the mess Ontario has made of its electricity system to see the consequences of trying to go too far, too fast – in Ontario’s case, with wind energy.

What this means in practical terms for energy and climate policy is that governments are trying to gently encourage clean energy technologies with subsidies and supportive regulations. But they can only push so hard. If they get too far out in front of the technology, consumers, and investors, they risk making Ontario-style mistakes.

At the same time, they have to pursue prudent economic policies that keep people employed and generate tax revenue, which encourages them to not punish fossil fuel industries too much. This leads to policies that appear contradictory, such as Alberta imposing an economy-wide carbon tax will lobbying hard for an oil sands pipeline to tidewater on the West Coast.

In fact, such policies make perfect sense. As fossil fuels and clean energy technology compete in the marketplace over many decades, governments will make compromises while they carefully calibrate their policies to get the optimum result.

Now, let’s imagine a continuum and put these governments and their energy transition worldviews in the center.

On the left end of the continuum is the environmental movement. Eco-activists also believe an energy transition has begun and they want it to happen as quickly as possible, by 2050 at the latest, sooner if possible. Well-funded environmental groups run aggressive campaigns, mobilizing supporters in public protests and social media, pulling both politicians and voters leftward. Public opinion polls show significant support for climate mitigation and clean energy technologies.

The environmental movement has had a huge impact on government policies over the past five years in both the US and Canada, and readers can expect that influence to grow, not diminish, over the next five or ten.

On the right end of the continuum are the energy industry boosters. Many think climate change is not caused by human activities and burning fossil fuels. And they point to the many economic and social benefits that cheap energy has generated for society. They oppose carbon taxes, emissions caps, and other regulations they think are expensive and unnecessary. Economic growth, job creation, and profits are their priority.

Boosters want governments to move as slowly as possible on climate change, preferably not at all. They think industrial pollution is a much higher priority than greenhouse gas emissions.

The tension between governments pushing hard (but not too hard) to reduce GHG emissions and advance clean energy technology, eco-activists pushing governments to speed up the process (and reduce the political influence of actors like energy companies), and boosters opposing policies that increase costs and reduce market share for fossil fuels, explains most of the recent political fights over energy and climate policy in the United States and Canada.

At present, political momentum is on the side of the eco-activists.

Climate-friendly parties are in charge of legislatures in the four biggest provinces (Ontario, Quebec, BC, Alberta) and in Ottawa. All eyes are on the American election, where a victory for Democrat Hillary Clinton will likely mean a continuation of Barack Obama’s moderately aggressive climate policies. A victory for Donald Trump will likely mean dismantling most of those policies, but at this point the Republican challenger is trailing badly in the polls.

The most likely likely outcome in both countries is that the present political trends continue for the foreseeable future: cautious governments advancing climate mitigation policies, hectored by eco-activists to go quicker and by industry boosters to go slower.