Alberta hydrocarbon sector already has problems accessing capital. Being perceived as a climate-risky jurisdiction could dry up access to capital or raise costs of financing, causing serious consequences for Alberta economy

Two weeks ago, the Norwegian sovereign wealth fund blacklisted four Alberta oil companies – Cenovus, Suncor, Canadian Natural Resources Limited, and Imperial Oil. Cenovus claimed the decision was “another example of Canada being used as a pawn by institutions attempting to earn climate points.” An Energi Media investigation shows that this is a false claim. In fact, the Norges Bank methodically and thoroughly reviewed the evidence, much of it based on the companies’ own public records, before making its decision.

This issue matters because as Larry Fink, CEO of $7 trillion asset manager Blackrock Inc., wrote in his famous letter from mid-January, climate risk is now affecting the allocation of capital. Norges’ decision is a just one more example of how huge institutional investors are reallocating their capital away from emissions-intense oil and gas production like the Alberta oil sands. 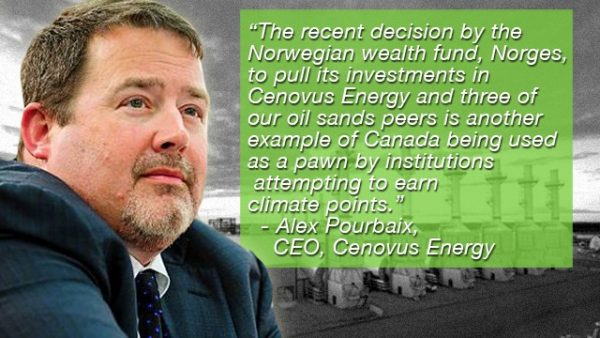 Alberta must have a better response than calling the Norwegians “hypocrites,” the main theme of comments from Alberta Premier Jason Kenney, Cenovus CEO Alex Pourbaix, and Alberta business leaders.

That response must have two components. One, evidence-based arguments that explain how the oil sands and the Alberta government are properly managing climate risk. Two, better narratives that help international investors understand the vision that the companies and the government – which, after all, is the owner of the resource – have for the oil sands in a low-carbon world.

Thus far, Alberta is failing dismally on both counts. And that matters a great deal for Alberta’s future.

The Norges decision is not a one-off, isolated instance, it is part of a global trend. UK-based HSBC has already restricted financing for oil sands projects and Swiss re-insurer Zurich Group will no longer provide insurance to them.

“Large institutional investors in Europe don’t seem to like oil and gas stocks anymore, that there’s a risk attached to them, which is linked to the energy transition, which is linked to climate change,” Singapore-based Wood Mackenzie analyst Angus Rodgers told Energi Media in a 2019 interview. “Many European banks will no longer fund coal projects. That was sort of the first domino to fall. Then that moved to the Canadian oil sands or drilling in the Arctic and very environmentally sensitive areas. Over time that will then transition to effectively an exit from lending to oil and gas companies.”

Today’s it’s London, tomorrow it will be Wall St. and then Bay St. that penalizes Alberta for not adequately managing climate risk.

How Norges made its decision

Norges has a well-developed set of ethics guidelines, approved by the Norwegian Parliament, that it uses to evaluate investments. The guidelines cover a wide range of unacceptable behaviour such as weapons manufacturing, violating humanitarian principles, and industries that exacerbate climate change. The Bank relies upon the Council of Ethics, a group of five Norwegian experts, for advice and recommendations about companies it should exclude from investment.

The Council has been evaluating the Alberta oil sands industry for years. It first recommended the oil companies be excluded in 2017. Norges rejected the advice then because the NDP government of Rachel Notley had only introduced its Climate Leadership Plan in late 2015.

The climate change exclusion criteria are fairly straightforward, according to Erik Forberg, chief advisor to the Council.

“The white paper states that companies’ absolute emission levels, emission intensity and emission reduction policy and targets may constitute the primary grounds for assessment under the climate criterion,” he told Energi Media in an email. “At the same time, the report makes it clear that recommendations must contain a description of any climate frameworks to which the company is subject.”

Since Cenovus responded publicly to Norges’ decision, how does it stack up?

Absolute emissions have been rising for more than a decade, along with the rest of the industry. Cenovus’ plan is to hold them flat, not reduce them, during the 2020s. While Cenovus has an “aspirational” goal to be net-zero by 2050, it is not a commitment.

That isn’t good enough for the Council.

“The guidelines are in their nature forward-looking, which basically means that our recommendations focus on future risks,” says Forberg.

From the Council’s point of view, Cenovus’ inability – or unwillingness – to lower its absolute emissions means the company could be penalized in the future by stricter climate policies. For example, Cenovus has capacity booked on the Trans Mountain Expansion, which is intended to serve Asian markets where climate mitigation measures are expected to become more rigorous over the next five to 10 years.

As for emissions-intensity, the benchmark for the Council is the 18 kg of CO2e per barrel average of European Union crude oil. For comparison sake, the average for Norwegian North Sea crude is 9 kg and for its giant Johan Sverdrup field it’s 0.67 kg. 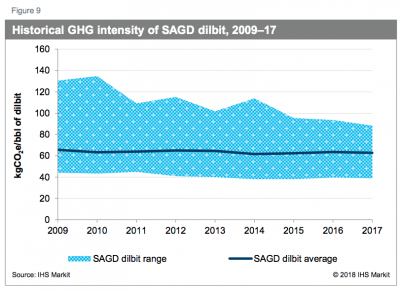 The numbers for the oil sands are startlingly higher: according to IHS MarkIt, the average is 77 kg of CO2e per barrel, with 137 kg on the high end and 37 kg on the low end.

The final criterion is the regulatory regime. Here, the benchmark is the EU Emissions Trading System, a 15-year old cap-and-trade regime. The Alberta system under the NDP government was the Carbon Competitiveness Incentive Regulation (CCIR). The UCP replaced it with with TIER (Technology Innovation and Emissions Reduction).

How do the three systems compare? According to economist Dale Beguin of the Canadian Institute for Climate Choices, it’s complicated. In theory, the EU’s cap-and-trade approach and Alberta’s carbon-tax model should produce roughly similar results.

“The standard economist’s line is that they’re way more similar than different and you can get to the same place with either price-based systems (Alberta) or quantity-based systems (EU),” he said in an interview.

But that’s not the way the Council viewed Alberta’s large emitter carbon tax. It hired Norwegian climate research institute CICERO (Centre for International Climate Research, based in Oslo) to provide insight into Alberta’s approach to carbon pricing. A sampling of conclusions from its report, of a copy of which was provided to Energi Media, include:

According to Forberg, the primary considerations for exclusion are a company’s emissions and plans to reduce them, while Alberta’s carbon price regime is a secondary consideration. Even so, Cicero’s report was damning evidence for the Council.

Look at the decision from Norges’ point of view

Norway considers itself a leader in the transition to a low-carbon economy. For example, generous subsidies help electric cars account for almost half of new vehicles sales, putting it on track to achieve its goal of phasing out internal combustion engine vehicles by 2025. It was one of the first countries to ratify the Paris Climate Agreement. And crude oil from its Johan Sverdrup field has the world’s lowest emissions-intensity (roughly 1% of the average emissions-intensity of Alberta oil sands bitumen).

The small Scandinavian country of 5.3 million with the $1 trillion sovereign wealth fund can afford to discriminate about where it invests.

By comparison, from the Norwegian point of view, Alberta simply does not look to be serious about climate change and reducing greenhouse gas emissions. Canada has one of the highest per capita GHG emissions rates. Alberta is responsible for 26 per cent of national emissions and the oil sands alone account for 11 per cent. While oil sands producers are lowering emissions-intensity per barrel, ever-growing supply cancels any chance of lowering absolute emissions for another decade or two, if at all.

Therefore, given the data gathered by CICERO, there is still plenty of credible evidence for the Council on Ethics to recommend excluding the four companies from investments.

Alberta must finally accept a fundamental truth about the modern energy world where public discourse is dominated by the energy transition and climate change: carbon-intense, high-emissions industries will be increasingly scrutinized, criticized, and opposed. This is a feature, not a bug. Lashing out in the media is a terrible political and communications response to that scrutiny.

At least it is if you’re trying to reassure global investors.

The much better approach would have been polite “agree to disagree” statements from the companies and Premier Kenney.

Why? Because as the perception of climate risk more and more influences the “reallocation of capital,” to use Larry Fink’s words, Alberta is likely to be viewed as an ever more risky place to invest. That perception could drive up the cost of capital. Or, make capital even more difficult to obtain than it already is.

This is why Alberta and the oil sands desperately need new narratives and communications strategies.