May and Blanchet are wrong, Kenney and CAPP are wrong…Canada desperately needs a third energy narrative that helps us prepare for an uncertain, volatile energy future

“Oil is dead,” says Green leader Elizabeth May. “Oil is never coming back,” says Bloc leader Yves-François Blanchet. Not only are they wrong, but their extremist narrative is just as dangerous as the equally wrong  Jason Kenney claim that Alberta will be fine in 2040 even if oil demand drops by a third. Canada really needs a new way to think about the future of hydrocarbons.

It’s an axiom these days that the Canadian conversation is polarized. Prof. Monica Gattinger, chair of Positive Energy at the University of Ottawa, says there are two competing energy narratives.

One is focused on reducing emissions and meeting Paris Agreement climate targets. May is a vocal proponent of this view.

The other assumes rising global demand for oil and gas, arguing that Canada is ideally positioned because of its “responsible energy.” Alberta Premier Jason Kenney and Tim McMillan, CEO of the Canadian Association of Petroleum Producers, are highly visible champions of this narrative.

“There isn’t a lot of space between those two narratives,” Gattinger told Energi Media in a 2019 interview. In other words, there’s no middle ground. You either love oil or you hate it.

May’s comment is designed to sell her agenda. She was on CBC’s Power & Politics with Vassy Kapelos, where punchy sound bites win and boring, evidence-based discussions lose.

“Oil is dead” is a clear winner with the Green Party crowd, most of the NDP, and many Liberals. You know, the parties that captured two-thirds of the popular vote in last year’s federal election.

It’s not hard to discern Blanchet’s agenda. Pipelines are deeply unpopular in Quebec and the last thing he wants is the rest of Canada resurrecting the Energy East pipeline idea to send Western oil to Easter and export markets.

The real problem with this story is that there is no third oil and gas narrative. Why isn’t there something between “oil is dead” and “oil is great”?

Here’s the most important reason why Canada needs that new narrative: the future of hydrocarbons has become very uncertain in a very short time. 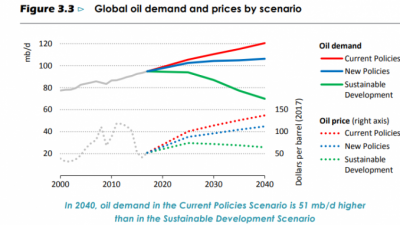 The International Energy Agency doesn’t forecast oil consumption, but it does create scenarios. Until recently, the IEA’s “stated policies” scenario was looking most likely. Buoyed by rapidly rising demand from Asia, oil use would rise from its current 100 million barrels per day to about 106 million barrels per day by 2040, before plateauing and beginning a slow decline.

Then came rapid improvements in electric vehicle Lithium-ion batteries that promise to lower the purchase price and extend the range of EVs. How dramatic are those advances? In 2018, battery experts told Energi Media they didn’t expect to achieve current cost and range targets until 2030. Clever engineering and greater economies of scale as automakers ramped up EV production are mostly responsible for achieving the targets a decade early.

Now add on the effects of the COVID-19 pandemic.

For example, during the lockdown of the past few months, as many as 50 per cent of employees in come countries may be working from home. Many employers have discovered that productivity is at least as good as working from an office. Many employees prefer the arrangement, though obviously not all given problems like juggling online meetings with parenting.

As economies are re-opened, what percentage of employees will continue working from home? How will that affect commuting and gasoline consumption?

We don’t know. There are no precedents to guide us.

Now, in addition to more rapid than expected clean energy advances and pandemic shocks, thrown in the price war between Saudi Arabia and Russia. The two sides may have declared a truce in the face of 30 million barrels per day of consumption that was vapourized in a matter of weeks, but what will happen as the global economy recovers?

If oil use doesn’t rebound, will the two big market players resume the price war to battle for market share? Again, we just don’t know.

What we can reasonably say is that the oil and gas future looks a great deal more uncertain and volatile today than it did even six months ago.

This is why Canada needs a third hydrocarbon narrative. Canada should have a strategy that is flexible enough to cope with both expanding and shrinking global markets. Instead of “oil is dead” and “oil is great,” we need to ask important questions like these ones:

How does Canada mitigate risk to its major export industry? What opportunities are likely to be created and is Canada positioned to take advantage of them? How might a new strategy fit with the federal Liberal government’s tougher approach to emissions and climate change?

This may be the most important question: Can Canada take control of its energy future instead of being passive and reactionary?

Energi Media has addressed these questions in the Energi Declaration and the Hydrocarbon Vision: From Fuels to Materials. As I argued in yesterday’s column, the oil and gas industry is too conservative and invested in the status quo to take the lead in a discussion of Canada’s energy future. A visionary political leader could lead, but a quick survey of the Canadian political landscape doesn’t suggest an obvious candidate for the job.

That leaves the work to be done by citizens. Read and sign the Energi Declaration. Share the Declaration and the Hydrocarbon Vision as far and wide as you can.

This is a start, but all journeys start with the first step.

$100 million for energy research? Why not invest $100 billion, instead?