Alberta released its natural gas strategy Tuesday and it reminds one of the old Clint Eastwood duster, “The Good, the Bad, and the Ugly.” Much of the new plan is repackaging and greenwashing, while increased emissions are ignored altogether. But there is also much to like, such as the intent to position the province as a global hydrogen supplier.

Here’s what the UCP government’s natural gas “vision and strategy” consists of:

“We will meet growing global demands for clean and sustainable energy by building on Alberta’s success in natural gas,” Premier Jason Kenney said in the government’s cheery, feel good press release. “Alberta is ready to lead in safe, clean and reliable energy today and into the future.”

What was not mentioned in the press release is that Alberta natural gas markets have been squeezed for a decade by cheap American shale gas. Despite some relief in 2020, prices are low and smaller producers weighted toward natural gas are in financial trouble.

It’s not hard to see why Alberta natural gas producers have been clamouring for the UCP government to ride to the rescue.

Under the new Alberta approach, there is a good chance natural gas emissions will follow the same path as the oil sands, with falling emissions-intensity but rising production leading to absolute emissions growth. This is a big problem for Alberta.

Oil and gas already account for 26 per cent of Canadian greenhouse gas emissions. With the federal government re-upping on meeting Canada’s Paris Accord 2030 climate targets, it’s hard to imagine the Trudeau Liberals will enthusiastically back Kenney. This is important because much of the new “vision” depends upon exports that require transport across provincial boundaries, which could trigger federal review under the new environmental assessment process ushered in by Bill C-69.

It doesn’t help that the UCP government is greenwashing natural gas emissions. For example, the strategy document claims that Alberta has a “low-carbon natural gas value chain.” That statement is factually incorrect.

A 2019 study by the Canadian Energy Research Institute, “Economic and Environmental Impacts of Methane Emissions Reduction in the Natural Gas Supply Chain,” estimates Alberta annual methane emissions from 10 billion cubic feet per day (Bcfd) at 24.5 megatonnes (Mt), while BC produces 5 Bcfd with 2.2 Mt of emissions, about one-sixth that of its neighbour to the east.

The difference between the provinces is caused by much more “associated gas” from oil production in Alberta, older and leakier infrastructure like processing plants, and electrification of some parts of BC upstream production.

Then there’s the problem with poor emissions data. “Another caveat is the quality of the input data, which wasn’t consistent,” says CERI research director Dinara Millington. “Data quality was a big concern.”

The Alberta government and the oil and gas industry are committed to the federal target of reducing methane emissions 40 to 45 per cent by 2025. But until emission measurement improves, no one has a good handle on just how bad the problem is. Several studies from environmental groups say emissions could be two or more times higher than government estimates.

SAG-D producers like Cenovus are busy trying to use less steam or eliminate it altogether by using solvents to thin the bitumen enough that it can be pumped to the surface. “As oil sands production increases, so will its natural gas consumption to support oil sands processing activities,” the government claims, but that only happens in a business as usual scenario, the very thing the Alberta large emitter carbon price (TIER) is supposed to curtail.

This isn’t the only instance where the natural gas strategy contradicts another Alberta policy: “A number of power-generation facilities in the province are also looking to convert to natural gas as a fuel source, increasing demand for natural gas as industrial electricity demand also climbs.”

Coal still accounts for over 40 per cent of Alberta electricity generation, a black eye for the province, while gas is close to 50 per cent and the rest is hydro, wind or solar. Now that renewables cost less than natural gas combined cycle generation, all of the coal-plants should be replaced by wind and solar, paired with battery storage if possible.

Converting from coal to gas should be unacceptable in the face of the climate crisis.

Finally, the UCP government has released its long-awaited hydrogen strategy. Purists will complain that Alberta will be making “blue hydrogen” with natural gas, then capturing the carbon and sequestering it in old hydrocarbon reservoirs, but “green hydrogen” made using clean electricity won’t be economic until 2030, according to the latest estimates. 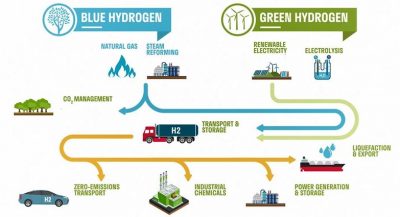 In the meantime, “blue hydrogen” is three or four times less expensive and the ideal fuel for hard to decarbonize industries like long-haul trucking and steel-making.

Hydrogen evangelist Maggie Hanna, a veteran Alberta geologist, thinks Canada should have a coast to coast network of pipelines dedicated to hydrogen. She agrees with the Kenney government that there is a significant export opportunity for Canada if governments and industry move quickly to take advantage of the opportunity. Watch the June 24th Zoffee with Hanna for a more detailed explanation of why hydrogen should be front and centre for Canada’s energy future.

Another good idea is to increase petrochemical production, which uses natural gas as the feedstock. Kenney likes to pretend that the Alberta Petrochemicals Incentive Program was created as part of his government’s Recovery Plan, when in fact it was launched in 2018 by NDP Premier Rachel Notley. And the current Premier always neglects to mention that he killed the petrochemical infrastructure program that was designed to help get natural gas components like ethane to the plants.

Nevertheless, having more non-combustion uses for Alberta hydrocarbons is an excellent idea, one that Energi Media has supported in The Energi Declaration and the Hydrocarbon Vision.

Lastly, making Alberta the centre of excellence for plastics recycling is an intriguing idea. Despite initial fears, this is one of the few issues on which Alberta and Ottawa seem to be aligned. By the end of 2021, Canada will ban certain single-use plastics, including checkout bags, straws, stir sticks, six-pack rings, cutlery, and food ware made from hard-to-recycle plastics, according to the plan released Wednesday.

The new rules are designed to “drive investment in recycling infrastructure and spur innovation in technology and product design to extend the life of plastic materials.” Governments across the country are collaborating on the “zero plastic waste” strategy and Alberta should be congratulated for spying the opportunity and moving quickly to take take advantage.

Industry is putting its weight behind the idea: “We are pleased to see the Alberta government create the environment for a plastic circular economy and allow our industry to do what it does best: deliver products and innovation the world needs,” said Luis Sierra, CEO of NOVA Chemicals.

Riding into the sunrise or the sunset?

Alberta’s natural gas vision and strategy resembles much of the UCP government other energy policies: happy to jump on the green agenda when it suits (hydrogen, plastics recycling), but unwilling to do the heavy lifting where it really counts, cutting GHG emissions (industrial consumption, LNG).

Sometime in the not too distant future, Alberta will discover what all Western movie bad guys learn the hard way – there is always a reckoning for bad deeds.